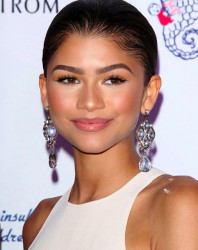 Hollywood it-girl Zendaya has been on a roll lately and now she’s the newest face of CoverGirl.

The 19-year-old starlet has maintained consistent presence in the music, television, film and modeling industries since making her way onto the scene at just 12-years-old, so it seems only natural that her next step would be a venture into the beauty industry as the face of one of the leading cosmetics brands in the world.

Zendaya announced the exciting news via this short video clip on her personal Instagram page earlier this afternoon.

CoverGirl confirmed the news shortly after on Twitter with their own announcement.

A flawless face for a top notch brand….sounds like a perfect match to us!