Makeup Monday Spotlight: Ayesha Curry Has Her Eyes on The Prize | Jones Magazine 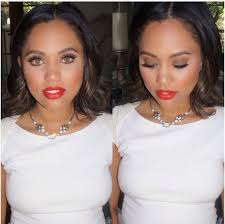 There’s a saying that beauty is in the eye of the beholder, but there is a such thing as universal beauty too. Something so beautiful that everybody who comes across it will undoubtedly appreciate the the beauty it exudes. Our Makeup Monday Spotlight goes directly to Ayesha Alexander Curry, a woman who’s eyes tell a story of happiness and perseverance that led to not only a YouTube channel called Little Lights of Mine, and a collaboration with a critically acclaimed chef named Michael Mina in a pop-up restaurant in the Bay Area. She also released a cookbook titled The Seasoned Life and a brand new cooking show that recently premiered on the Food Network channel called Ayesha’s Homemade. Whew, this young lady has been extremely busy and has managed to look as if she never breaks a sweat. Check out this awesome way to duplicate Ayesha’s stunning look with a “cat-eye” effect created with liquid liner by Katrina Maree.