Jourdan Dunn Says Black Models In Fashion Should Be The Norm

Supermodel Jourdan Dunn has been one of many models of color who have spoken out about the lack of diversity in the fashion industry throughout the course of her career and in a recent cover story with ELLE UK, she spoke candidly about why she feels there’s still much progress to be made.

“There are definitely a lot more girls of color being represented. But I also feel like we’re 100% still not there. I want to see us get to a place where seeing a black girl, anywhere, is not such a big deal. Why can’t it just be the norm to see black models in campaigns and on covers and runways? It’s still too much of a big thing when this happens.” 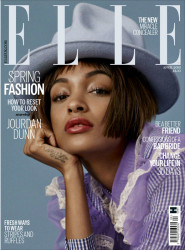 Outfitted in Vivienne Westwood and Miu Miu for the cover photo, the British bombshell, who is gearing up to launch her first children’s line, also opened up about balancing motherhood with her modeling career as her 6-year-old son battles sickle cell anemia.

‘The one thing about parenthood no one ever warns you about. They tell you about the sleepless nights, but no one ever warns you about the guilt. He was just in the hospital last month, but I’m fortunate that he’s quite well. So if something happens at work and I don’t get an opportunity, it’s fine. I’m not gonna cry about this stuff. I’ve got bigger things to think about, like my son and if he’s OK and keeping him out of the hospital. Ultimately, I look at it like this: I am my son’s lifeline. Mummy needs to work to put food on the table and pay his school fees. So I always keep that in the back of my mind.”

You can check out Jourdan’s full interview HERE.