Deprecated: Methods with the same name as their class will not be constructors in a future version of PHP; DisqusAPI has a deprecated constructor in /var/www/wp-content/plugins/disqus-comment-system/lib/api/disqus/disqus.php on line 59
 Rihanna’s Star-Studded Diamond Ball Brings Out The Fashionably Generous For A Great Cause | Jones Magazine

While many of us spent our weekend engaging in ugly sweater debates at end-of-the-year gatherings, pop superstar Rihanna was putting a charitable spin on the term “holiday party” by encouraging her celebrity friends to spend big while looking fabulous for a great cause at her second annual Diamond Ball. 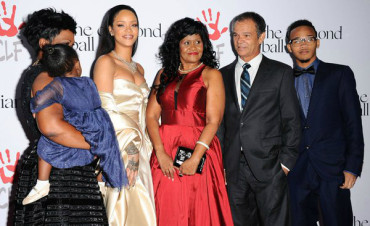 Packing Santa Monica’s infamous Barker Hangar venue with nearly 600 familiar faces from the entertainment and business industries, the Barbados-born beauty treated guests to a night of music, food and fun as they gathered to raise funds for her Clara Lionel Foundation (CLF). Established by Rihanna in 2012 in honor of her late grandmother, the CLF aims to improve the quality of life for communities globally in the areas of health, education, arts and culture. 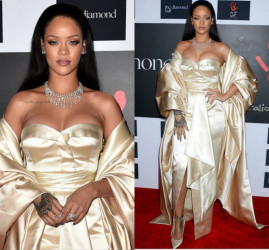 Per usual, Rihanna wowed on the fashion front in a strapless gold Dior gown accentuated by diamond Cartier jewelry and simplistic make up. 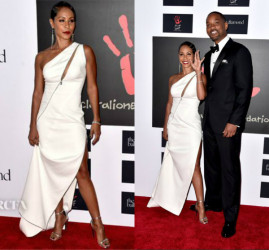 Jada Pinkett-Smith also turned heads in an all-white, one-shoulder Zuhair Murad dress with zipper detailing and a smiling Will Smith at her side. 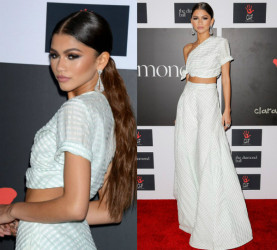 Rising Hollywood starlet Zendaya was the talk of the carpet in an ivory two-piece outfit by emerging designer Rosie Assoulin. The one-shoulder crop top and flowing trouser ensemble was perfectly complimented by Zendaya’s sleek ponytail, bold eye make up and nude lipstick. 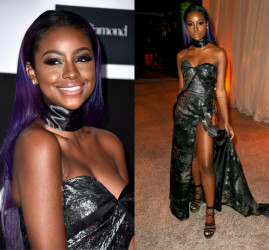 Always-stunning Roc Nation songstress Justine Skye opted for a strapless black and silver metallic Rubin Singer gown paired with minimal jewelry, striking make up and hints of her signature purple hues to add a pop of color to her look.

Other notable attendees included Rihanna’s mother, father, brothers and adorable 2-year-old cousin Majesty, legendary R&B crooner Lionel Richie, actress Holly Robinson Pete and Kylie Jenner.  The night proved the be a charitable success for the second year in a row, with event host Kevin Hart announcing a final donation tally of over $3 million at the close of the evening.