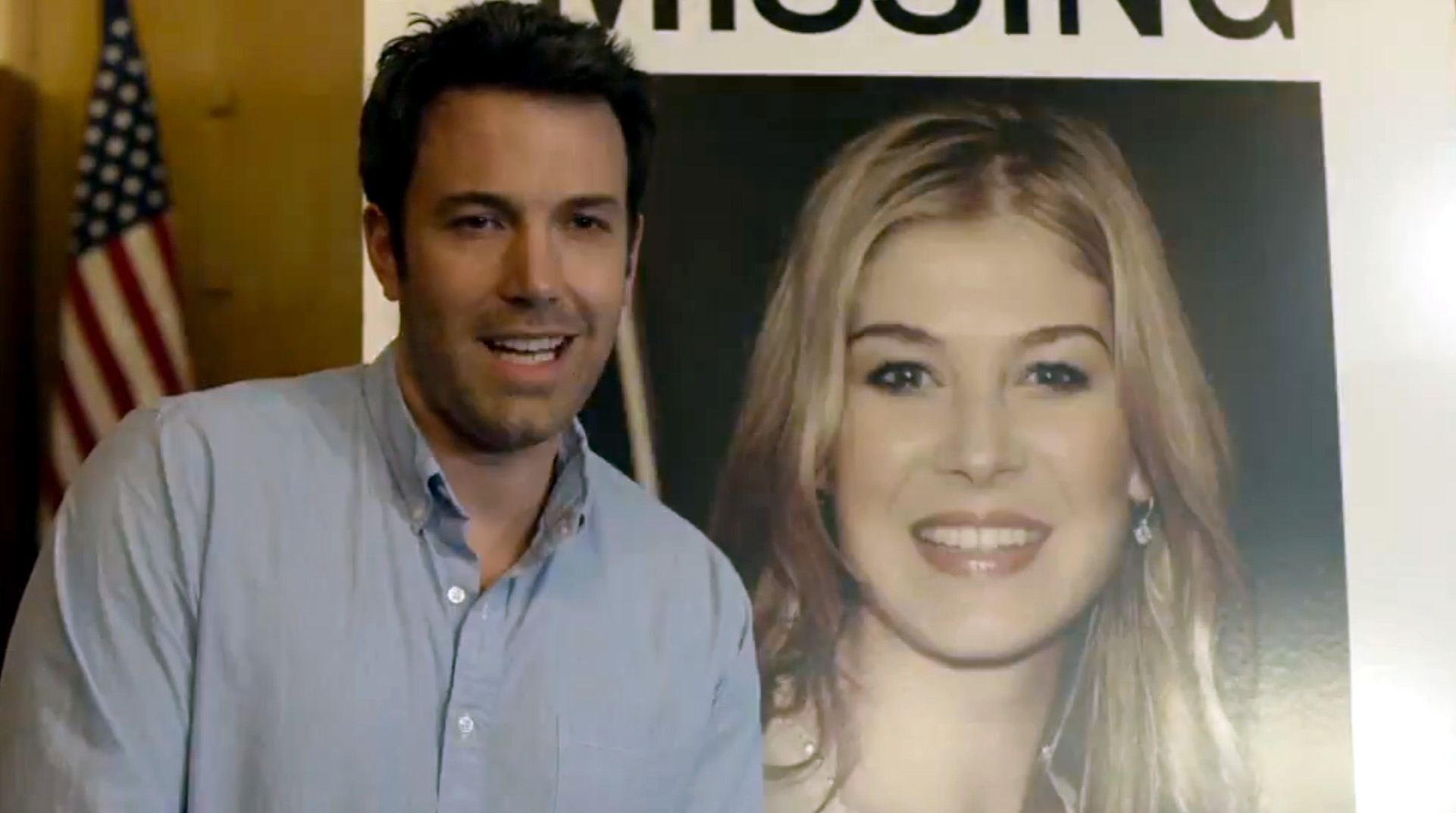 Holy crap. Where do I even begin.

Before the movie even began, the theatre was stirring with the energy of all of us awaiting our journey into Fincher-land that night. I used my rather mediocre AT&T service to briefly check the film’s running time. 149 minutes. Almost two and a half hours. I sighed, my attention span let out an audible yelp.

A film I had prematurely reduced to a time unit turned out to be one of most thrilling cinematic rides I have ever had the privilege of experiencing. Yes, it was long. But, perhaps like a king-sized bacon cheeseburger I know won’t be consumed without some discomfort, there was no option but to finish it. And I loved every bite of it.

I am unsure as to how I can delicately proceed explaining the basic plot of the movie without accidentally venturing into no-man’s land, that is, unintentionally revealing too much, or inadvertently ruining one of the many twists that make the story the true star of Gone Girl; trying to write a spoiler-free review for Gone Girl is like trying to go through a landmine on a snowboard. In short, the film chronicles the 5-year relationship between Nick Dunne (Ben Affleck) and Amy Elliott (Rosamund Pike), both New York transplants residing in suburban Missouri, he a former men’s magazine writer turned bar owner, she a privileged trust-fund baby whose parents gained admission into the upper echelon of American literature by co-penning Amazing Amy, a plagiarized version of real Amy’s childhood, after renovations. Their first months together are ceremonious and latent with parcels of raw and spontaneous sexual energy, moments the film does not shy away from. Residing in a spacious apartment with a view in New York, funded off their passions (and maybe some modest assistance from that trust fund) means that they are essentially living the dream—that is, until the recession hits and like all things that seem too good to be true, their lives dip south and, at the news of a sick parent, Nick is forced to move back to Missouri, dragging Amy with him.

The film opens on the day of their 5th anniversary. Nick, up early, ventures to the bar he co-owns with his sister Margo (Carrie Coon) for a few rounds of beer and board games. When he returns home, however, he finds his wife missing and the living room in eerie disarray. Calling the police doesn’t quite get him anywhere, of course, because he’s a prime suspect.

And so Fincher sets up what we think is the central investigation of the film: did Nick Dunne murder his own wife? And for at least a solid hour, it is. But when this central question is answered halfway through the film, we realize that the piece de resistance is not a yes or no, and that nothing in life is black and white. Thus, just when you’re expecting the denouement, the movie keeps plowing forward and unraveling, exposing and imploding unto itself, taking our perceptions and smashing it, until eventually there is no choice but to surrender to the velocity and bearing of Fincher’s mastermind. Ultimately, more than being a story about a relationship, about Nick and Amy, about a gone girl, it is a movie about storytelling, about perception, about deception, about truth, and the spectrum of perspectives there can exist on one singular truth. It is a movie about America, about our mob mentality, about out sensationalist media, and the universality of these realities. It’s a movie about Nancy Grace (sort of). Gone Girl speaks heavily on how we present ourselves, and about the way we strain to manufacture our own image. I hesitate to be more specific—I hesitate to say that this is a film about the consequences of Nick and Amy’s happy-go-lucky-turned-toxic marriage, because it could potentially lead you to certain conclusions, but I promise that unless you’re familiar with Gone Girl the novel, none of your intuition and prediction matters. In a seemingly impossible conundrum, Fincher both expertly handles the narrative well enough so it is never a chore to watch his film, but at the same time, it is without a doubt some of the most mentally and emotionally draining hours you will spend at a theatre.

It is only fitting of course, that in this film about storytelling and presentation, that this film be presented in an organized, manicured way. Most of the film is narrated in a split-track between Nick and Amy’s viewpoint. Each perspective brings something new to the table, each switch of vantage point elevating the intensity, furthering the plot, and drawing the audience closer to a boiling point we later discover we had been tricked to believe even existed in the first place. Remember Memento? It’s much like that, but not at all. Perhaps it is unfair to be giving so much credit to the framing of the film when the story itself, as I have previously mentioned, is gloriously and deliciously complex in its own right, but the engineering of the film’s elements is superb.

The cast was, as expected, remarkable as well. Ben Affleck turns in an amazingly layered performance, beautifully balancing strength and vulnerability, being both amiable and unlikeable, riding on the wave of an extraordinarily crafted character and rich text, but not relying on it. To the same degree, perhaps even more, Rosamund Pike gives what could become a career-defining performance as Amy Elliott. In a way that you’re not immediately conscious of, she manages to portray a real, nuanced human being, when her character on the page could’ve easily been interpreted as crazy, neurotic, even psychopathic. The rest of the ensemble, rounded out with star guest appearances from Neil Patrick Harris and Tyler Perry, is great, in particular Missi Pyle as gossip girl TV cable host Ellen Abbott.

Just unscrambling all my thoughts and impressions on Gone Girl, and churning out this review makes me feel as if I just lifted an elephant with my pinkie—my point being that the movie is heavy. And dense. It’s very dense. But it sits there, with a smirk on its face, prodding you to step closer, before it punches you in the face, leaving you stunned, bewildered, drained of any linear thoughts, until hours, maybe days later, you realize that all of what flashed before your eyes that inconspicuous Tuesday night—that experience you shared with all the others in the same room—was in fact so scarily reflective of actual society, of our day-to-day lives, so much so that in a way, Gone Girl is a thriller, a mystery, and a satire all at once, packaged as two and a half hours of cinematic nirvana.